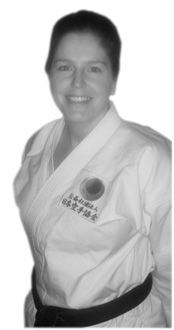 Katrina Ciolli first began her karate journey in the late 1980’s in country Victoria. She connected with the art of karate and continued training whilst on exchange in Germany before moving to Melbourne in 1996 where she joined Sensei Edji Zenel at the JKA Dojo in Melbourne. Katrina graded to Shodan (black belt) in 1999.

Katrina has competed with the AKF Victorian Kumite team as well as in the state championships for both Kata and Kumite and numerous other local and club tournaments.

Her love and passion for karate has seen her travel and train with many different karateka from all over the world.

Katrina now holds the rank of 3rd dan black belt (Sandan), which is internationally recognised by the Japan Karate Association (JKA). She is also a Level 1 accredited Karate Coach under the National Coaching Accreditation Scheme (NCAS).

In 2015 Sensei Katrina opened the Alpine Dojo in Bright. She now shares her passion for karate with students from all age groups (5-75 years of age!) and enjoys assisting them with their karate journey. Sensei Katrina loves having the beautiful Australian Alps, snow-capped in winter, as the backdrop for her Alpine Dojo.

She truly believes Karate is a journey for life.