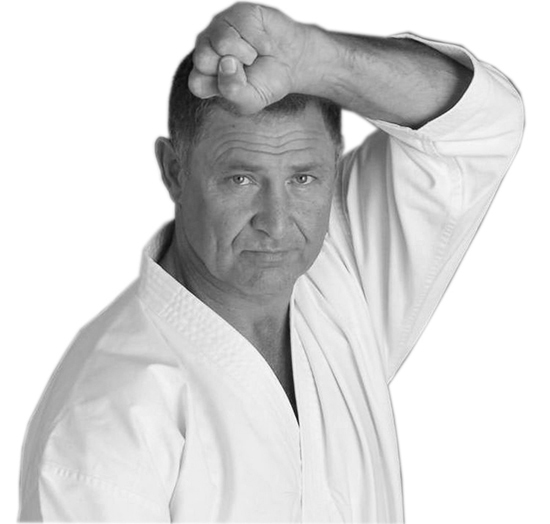 Keith Geyer is the National Chief Instructor for the JKA-SKC Australasia. He has practiced the art of Karate since the early 1970’s under the guidance of Stan Schmidt Sensei.

Sensei Keith has visited and trained in Japan many times in order to improve his skill and knowledge. Much of this time was under the expert guidance of the late Masatoshi Nakayama Shihan. He has also been taught by, Kanazawa, Asai and Abe, and sparring on a daily basis with Sensei’s Tanaka, Mori, Yahara, in sessions that can only be described as ferocious where his main goal was survival. This contributed greatly to his development as a karateka, and his exposure to so many karate masters deepened his appreciation for the spirit and traditions of Shotokan karate. Early morning training during this time in Japan was spent at Hoitsugan, Nakayama sensei’s private dojo. Sensei Keith realises that it was a great honour and privilege to have been taught by Nakayama Sensei, a direct student of Funakoshi Sensei, and the one selected personally to pass on the art of karate to modern day of practitioners.

In September 2000, Sensei Keith, was graded 7th Dan in Tokyo by a grading panel headed by JKA chief instructor Motokuni Sugiura Shihan. Sensei Keith continually strives to improve his personal standards and motivates his students to aspire higher urging them to follow his own appreciation, enthusiasm and dedication to the art of JKA Shotokan karate. His lifetime dedication to the art of karate, and his achievements as a karateka, where recognised in February 2015 when he was honoured by being appointed a member of the Japan Karate Association’s Shihankai (Masters Association) panel.